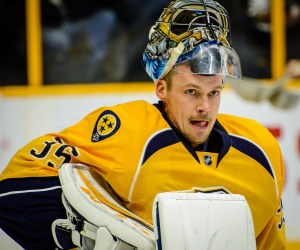 Heading into Tuesday night’s matchup against the visiting Montreal Canadiens, many Nashville Predators will be facing former Predators captain Shea Weber for the first time in their NHL careers.

When asked about it following Monday’s practice at Ford Ice Center, they were all looking forward to the new challenge.

Predators goaltender Pekka Rinne has faced countless thousands of Weber shots in practice over the years. He was asked what sets Weber’s shot apart from other players who shoot the puck hard.

“It just hurts,” he said. “He’s a big body and he’s so strong. I guess shooting the puck is also about technique. He has all of those things. It does come hard. It is one of the better shots in the NHL, especially his one-timer. He’s still pretty accurate with it. It’s just so quick, so fast.”

Weber is the two-time defending champion of the NHL’s Hardest Shot Competition at the All-Star weekend’s skills competition. He won last year’s event in Nashville with a shot of 108.1 mph, which was just four-tenths of a mile per hour slower than his 2015 winner.

With eight power-play goals this season, Weber leads all NHL defensemen and is tied for second overall, one behind Pittsburgh’s Sidney Crosby.

As much as a handful as Weber is in his team’s offensive zone, he is equally difficult on opponents in Montreal’s defensive zone. Weber leads the Canadiens and ranks eighth in the league, averaging 26:02 of ice time per game.

Like Rinne, many of Nashville’s forwards have battled Weber in practice for years. With the intensity that Weber brings to the practice ice, his former teammates know that they are in for a long evening Tuesday.

“It’s going to be very different,” said Colin Wilson. “In today’s game, a lot of the accolades go to the real offensive defensemen and Webby, his defensive play is unparalleled. He’s unbelievable down there. He’s so strong. Even in practice, 3-on-3s, his strength is pretty incredible.”

Filip Forsberg has been on an offensive tear lately, posting five goals in his last six games. He knows that battling against Weber will be tough, but he is looking forward to seeing how he measures up against him.

“You always want to match yourself up against the best, and he’s definitely one of them out there,” Forsberg said.

Throughout his NHL career, no one has had a better view of the work Weber does in the defensive zone than Rinne.

“A player like him, there’s no other player like him in the league,” Rinne said. “The things that he brings; his strength, his ability to move guys and stuff like that, I don’t think there’s another guy like him.”

David Poile sent Weber to Montreal in exchange for P.K. Subban in a late June blockbuster trade. Poile spoke with the media following Monday’s practice. A large number of Montreal scribes were there to hear Poile’s thoughts.

“I see now where Shea is probably getting the recognition that he deserved,” Poile said. “We’re a little under the radar here in Nashville media wise, not today. Shea was, I think, in the top three for the Norris Trophy three times. I think he should have won it at least once and he didn’t. I think that in Montreal, with all due respect to Nashville, that he might have already won a Norris Trophy. And maybe this year in Montreal and getting all of the recognition that he is, maybe this will be the year that he wins the Norris Trophy.”