When Nashville Predators head coach Barry Trotz filled out his lineup card prior to Sunday night’s game at the United Center in Chicago, one name omitted was that of defenseman Michael Del Zotto. It was the second time in three games that Trotz made Del Zotto a healthy scratch, and for all intents and purposes, Del Zotto was basically a scratch in Friday night’s game in Calgary, seeing just 3:13 of ice time.

Against the Flames, multiple injuries up front forced the Predators to dress seven defensemen. He did post a nice assist in his very limited ice time in that game.

Acquired in a January 22nd trade with the New York Rangers that saw longtime Predator Kevin Klein sent to the other Broadway in return, Del Zotto has just four assists in 19 games played with the Predators.

On the day he made the trade for Del Zotto, Predators general manager David Poile said Del Zotto’s penchant for offense was one of the main reasons he made the deal.

“We’re a team that struggles a little bit offensively and a lot of our offense comes from our defense, and I think Del Zotto is another piece that will help us in that area,” Poile said at the time. “Del Zotto has a big time upside offensively and hopefully under our coaches, that will be fulfilled.”

Following Friday’s scratching, Trotz told The Tennessean that things weren’t working out the way he was expecting them to with Del Zotto.

“You’re always competing for a spot. He’s not veteran enough to not compete for a spot,” Trotz said. “Every night has to be about consistency for him and we have some people we can pull in and out.”

Del Zotto has tremendous offensive upside, but Trotz is not a fan of one dimensional players, and he requires them to give effort at both ends of the ice.

With just ten games remaining in the Predators’ disappointing 2013-14 season, how Del Zotto is handled down the stretch could provide just another story line in what is setting up to be an interesting offseason for Nashville.

Whether this is just a short-term player/coach disagreement or if there is more to the situation still remains to be seen.

Del Zotto wanted out of New York following last offseason’s coaching change from John Tortorella to Alain Vigneault. The trade to Nashville seemed to be just the opportunity he was looking for.

Del Zotto will be a restricted free agent at season’s end. Carrying a $2.9 million salary this season, the Predators would need to make him a qualifying offer of at least that amount just to retain his rights.

Following an all but decided second-straight finish out of the playoffs, changes to the front office and/or behind the bench seem like distinct possibilities. With so many of the team’s current players already under contract for next season, making major modifications to the roster will be an almost herculean task.

If whoever is running and coaching the team decide that they do not want Del Zotto back for next season and beyond, they have the option of not providing him a qualifying offer, essentially losing him for nothing beyond the games played here, or trying to trade him to another team.

Losing Del Zotto for nothing would not look good on the front office. Klein was a reliable defensive defenseman who is signed for four more years with a bargain of an average cap hit of $2.9 million.

There are lots of moving parts here, and the coming weeks will be interesting to watch, especially with regard to Del Zotto’s future in Nashville. 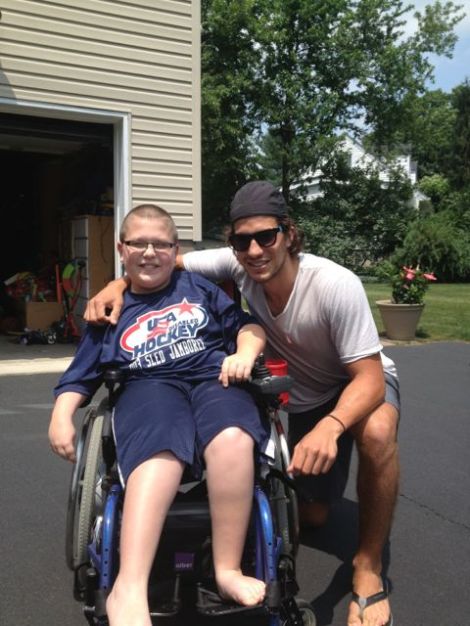 Most hockey players have certain routines that they go through before a game. Nashville Predators defenseman Michael Del Zotto is no different, but one of the things he does prior to a game stands out as a bit unique.

Each game day, Del Zotto checks his phone to read a text message from his 12-year-old friend Liam Traynor.

“He texts me before every single game, and says ‘good luck, go get em,’” Del Zotto said. “He gives me a little pep talk.”

Liam was featured as part of HBO’s “24/7” series leading up to the 2012 Winter Classic game between the New York Rangers and Philadelphia Flyers. One of the documentary’s episodes profiled the special relationship Liam had with then-Rangers head coach John Tortorella.

Mostly known for his crusty exterior and testy exchanges with the media, Tortorella showed a much softer side in his interactions with Liam, who is living with Cerebral Palsy.

One of the scenes took place in Liam’s bedroom. He is shown maneuvering his wheelchair over to a Rangers jersey hanging on one of the posts of his bed. That jersey was Del Zotto’s number four.

“We met, I am pretty sure it was my first year,” Del Zotto said. “He came to practice and I just saw him there, came over to him, and gave him a stick. From then on, we’ve just become friends.”

Not long after that, Liam attended a Rangers game at Madison Square Garden and went down to the team’s locker room after the game. Del Zotto brought his friend to the team bench where they spent the next hour discussing all of the things that happened during the game and where they occurred on the ice.

Following one of Liam’s surgeries, Del Zotto surprised his friend at the family’s Rockland County, New York home so that they could play Xbox together.

One of the signs of a solid friendship is when one friend stands up for the other, and that’s exactly what Liam did during Del Zotto’s second NHL season when the Rangers assigned him to their American Hockey League affiliate in Hartford, Connecticut.

Not happy with seeing his friend and favorite player sent down to the minors, Liam called Tortorella looking for an explanation. To his credit, Tortorella called Liam back and explained the process that teams sometimes have to go through with young players.

A New City, A New Beginning

An offseason coaching change in New York made the start of the 2013-14 season a difficult one for Del Zotto. In late January, the Rangers sent him to Nashville in exchange for longtime Predator blueliner Kevin Klein.

Seeing his friend move close to a thousand miles away was difficult, but Liam has seen a dramatic on-ice change in Del Zotto early in his tenure with the Predators.

“I am very excited to see Michael and see a different approach to how he plays,” Liam said. “When he was in New York, when I saw him the last time before he got traded, you could see that he was very frustrated and he was not himself. Now to see him with the Predators, you can definitely see him relaxed and see him taking risks and knowing that he can make those plays.”

Liam also noted the instant chemistry Del Zotto developed with Seth Jones, who Del Zotto was paired with when he first became a Predator. And as a sled hockey defenseman, Liam definitely knows what he is talking about.

Knowing that Liam missed his friend, one of Liam’s fellow Ranger fans came up with the idea of starting an online fundraiser to send Liam and his family to Nashville to catch a Predators game.

“When we saw the site, we were like, ‘Oh my goodness,’” Liam’s mother Deborah said.

In just 11 days, the online fundraising campaign raised over $4,000, enough to cover all of the transportation and lodging expenses for the entire Traynor family (Liam, his twin sister Shannon, seven-year-old brother Kieran, and parents Deborah and Richard) to head south and reunite Liam with Del Zotto.

Single donation amounts ranged from five dollars all the way up to $1,000, with all contributors electing to remain anonymous.

Since the Predators do not face the Rangers or the Vancouver Canucks, Tortorella’s new team, in Nashville again this season, the March 8 game against the Columbus Blue Jackets was selected as the target.

“It was really generous of the fans to raise money to send him down here,” Del Zotto said. “I know it means a lot to him, but it means even more to myself.”

Thanks to one Rangers blog, Liam will have proper attire for a game in Smashville. That blog sent him a Predators jersey, complete with Del Zotto’s name and new number. Liam says he can’t wait to get his friend to sign his new jersey.

“He texted me one day, and I asked him if he was going to keep his number and he said he didn’t know yet,” Liam said. “He asked me what numbers would you choose and I said five, two, and 43. And he chose five.”

Del Zotto did not have too difficult of a decision to make; in fact, it was already made for him.

“You can tell he has a lot of pull with me,” Del Zotto said with a smile.

Thanks to a helping hand from the brass at 501 Broadway, Liam and his family will have their seats at the game upgraded. They will sit in the suite that Pekka Rinne and Shea Weber purchase for each home game, usually for use by families going through some difficult times.

“Whenever we get a chance to use this team to make someone’s night a little nicer or make them forget about some pain, it’s a good thing to do,” Predators president and chief operating officer Sean Henry said. “Sometimes you do things to make a kid smile.”

Still a diehard Ranger fan, Liam is now a big supporter of the Predators as well.

“His room is painted all in New York Rangers’ colors and theme, but now he says he wants to paint the other half the Predators’ colors,” Deborah said.

Liam has been doing some walking on the treadmill lately. He documents the workouts and sends the video to Del Zotto.

With the Traynor family set to be in town for the game on the 8th, Del Zotto’s pregame routine will be a little different. He won’t have to check his phone for words of encouragement from Liam. He will be able to get them in person.

“He and his family talk about what an inspiration I’ve been to him, but for me, it is the other way around,” Del Zotto said. “I am just so happy to be able to call him my best friend.”