As has been the case for the last several years, Bridgestone Arena has introduced several new items that will be featured in their concession areas across the building.

Here is a look at the newest offerings at 501 Broadway. Click on the pictures to enlarge the images.

More after the jump. 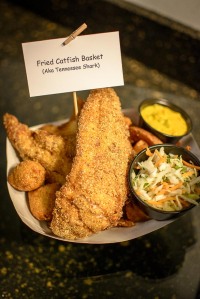 The chefs at Bridgestone thought that they should do something with all of those catfish that get lobbed onto the ice during the games, so they came up with the idea of creating a catfish basket.

The catfish is fileted and marinated in buttermilk and hot sauce. After it is fried, it is served with hush puppies and a golden tartar sauce.

They aren’t really using fish thrown onto the ice by fans since serving fish that was in some sweaty dude’s pants for a couple of hours would be a gigantic violation of the food safety codes. 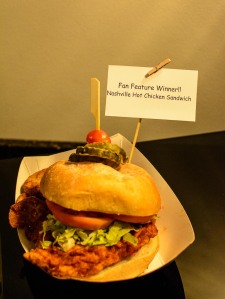 Nashville hot chicken was introduced last year. Bridgestone head Chef Wade made a slight adjustment this year, moving from bone-in chicken to a boneless variety and placing it in a bun. Chef Wade thinks hot chicken 2.0 is more portable and therefore more conducive to in-arena dining. 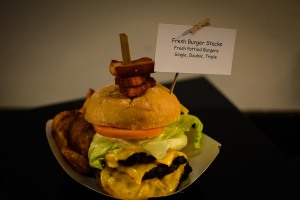 The arena is transitioning from its current build your own burger and going with the stack concept. Previously, they started with an 8 oz. burger patty, but now, consumers have the option of going with one, two, or three patties of 4 oz. each.

For those feeling gluttonous, the two or three patty stacks come adorned with a bacon on a stick skewer. 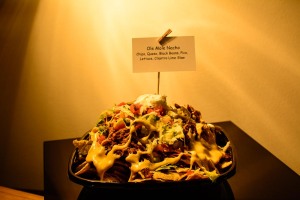 There is a 90% chance that fans of the University of Mississippi will mispronounce the name of this dish. Think a sound at the end of both the first and second words.

These nachos are available with chicken, pulled pork, or beef brisket. 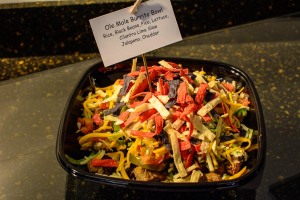 Everything you want in a burrito minus the tortilla wrap causing half of the contents to fall all over the floor or yourself. 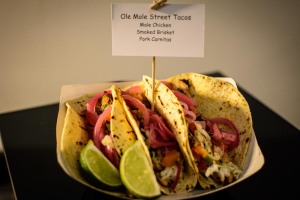 A win/win – It is street food without having to leave the convenience and temperature-controlled environment inside Bridgestone. 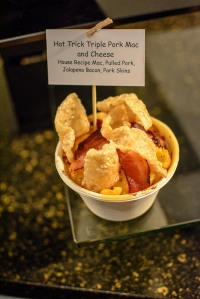 So good, you will probably forget your own name. Seriously.

Bridgestone’s partnership with the Food Network has ended, so the wildly popular Buffalo Mac and Cheese went with it, but Chef Wade and his charges wanted to replace it with something even better. Enter the Hat Trick Triple Pork Mac and Cheese.

First of all, it is mac and cheese, so you are already off to a great start. Then they throw in some pulled pork with barbecue sauce, put some more cheese on top, and then bake it. Oh, there are two pieces of bacon thrown in there for good measure. The concoction is topped with fried pork rinds.

As an added bonus, each serving is made in its own individual bowl, so there is a better chance of even distribution of the contents, plus everyone is assured of getting the baked cheesy goodness on top. 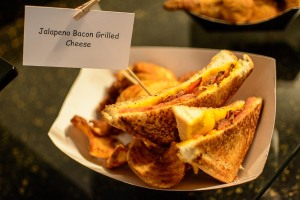 In the same family as the Hat Trick Triple Pork Mac and Cheese, this takes the simplicity of grilled cheese and then escalates things with jalapeno bacon.